Does Idris Virgo Have A Child? Mum Claims The Love Island Star Is Her Daughter’s Dad

The reality contestant was accused of refusing to do a DNA test.

Love Island newbie, Idris Virgo, has been accused of having a secret daughter outside of the illa by his ex, who claimed he is refusing to do a DNA test on the little girl.

Mum of two Fay Knott claims that Idris is the father of one of her children, taking to Facebook to express her surprise and anger at his appearance on the steamy reality TV show.

She wrote, “OMG so the guy I dated (Idris) is Love Island’s new islander and he claims to be 2/5 snake but wouldn’t even do a DNA for her to confirm anything. OMG I’m angry but this is actually hilarious.

“I might go on Love Island this year to get that DNA of Idris for my daughter." 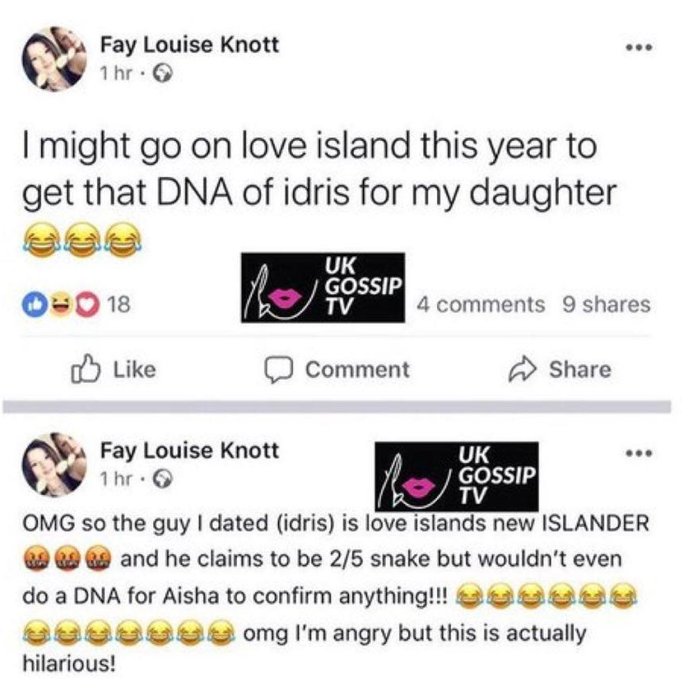 There’s been no comment from ITV or Idris’ representatives yet, but the contestant ruffled a few more feathers on the show after apparently lying to Laura Anderson about the boy she’s coupled up with, Jack Fowler, making the first move to kiss Georgia Steel on their date.

It’s certainly going to be interesting when he leaves the villa!

> Grab Our App For The Latest News And Gossip From The Love Island Villa!