Harry Styles is currently filming for his upcoming movie, My Policeman, and he is apparently set to dye his hair blonde for the role after it was heavily rumoured he'd be undergoing a transformation for the film.

Harry Styles has just begun production for his upcoming film, My Policeman, alongside Emma Corrin and David Dawson, and it has now been reported that the ‘Adore You’ star is planning to go blonde for his role in the movie.

According to this publication, the former One Direction star is set to dye his hair blonde as he takes on the role of PC Tom Burgess in the film adaptation of the book by the same name.

A source also told the publication about the upcoming flick: “With Harry and Emma starring, it’ll be a hit!”

Word of Haz dying his hair blonde for the movie comes after it was widely rumoured last week that he had already undergone the hair transformation.

It all started when a picture shared on Twitter had fans thinking Harry had already dyed his hair blonde, but it turns out the man in the snap, who was wearing sunglasses and a face mask, was Chris Pine.

However, now that his upcoming blonde look has seemingly been confirmed, fans are excited to see Haz in his new role.

Taking to Twitter to share their thoughts, one person shared baby photos of the star with blonde hair, penning: “HARRY STYLES BLONDE ERA IS COMING AGAIN.”

“I’m seriously scared to see how he will look like,” shared another, while a third replied, “honestly same but like it’s harry styles, he can pull off anything [sic].”

The ‘Watermelon Sugar’ singer was also spotted in London last week as he met some fans while wearing a super casual outfit and a seriously iconic pink beanie.

Some fans now think he could’ve been wearing a beanie to cover up his new look!

At this point, we just wanna see pics, tbh! 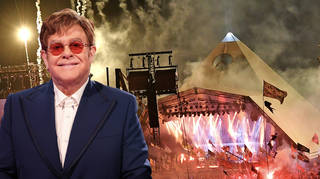