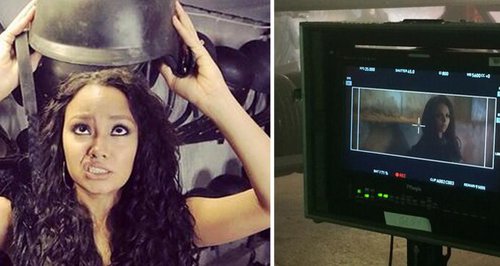 The 'Word Up' singers have been revealing tidbits about their next 'Salute' release.

Little Mix have shared several teaser pictures and clips from the shoot for their 'Salute' music video.

The 'Little Me' four-piece confirmed over the weekend that they will launch the title track from their 2013 album as the third single.

"Getting in character for today's #SaluteVideoShoot - you guys are gonna LOVE this video!" Leigh-Anne Pinnock tweeted alongside a snap of her trying on an army-style helmet.

The UK band also posted up a clip of band member Jade Thirlwall teasing the video itself, which follows the band's charity single 'Word Up' as their next release.

Little Mix have yet to announce an official release date for 'Salute'.