WATCH: Little Mix Teach You How To Dance To New Song 'Black Magic'

Ahead of their performance at the #CapitalSTB Jade, Perrie, Leigh-Anne and Jesy Nelson show you the steps you need to know to dance along to 'Black Magic.'

If Little Mix's 'Black Magic' is the only song you're breaking some moves to at the moment you're in luck! Ahead of their performance at the Capital FM Summertime Ball with Vodafone, Perrie, Jesy, Leigh-Anne and Jade took some time backstage to give a tutorial on how to drop some serious moves to their new single.

All four girls explained the one crucial move fans need to know about to absolutely nail the dance. First, put your right leg out, then flex your heel and put your arms above your head.

Next up "flick your heel to the side" and move your arms "a bit like chicken wings," Jesy explains. 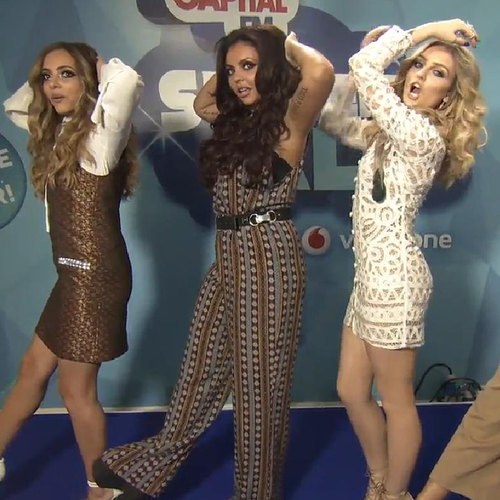 The ultimate advice came from Perrie, who reminded everyone; "Make sure you can see through your arm and work that shot!"

Earlier in the day the four girls exclusively told Capital that their new album is done and teased the big news of when we can expect to hear it.

Little Mix did an epic performance at Wembley Stadium today (6th June 2015). In front of 80,000 people they kicked off their set with hit single 'Salute,' before going on to perform 'Move,' new single 'Black Magic' and Little Mix favourite 'Wings.'