Gigi and sister Bella Hadid give us sibling envy, if that's a thing.

Gigi Hadid, 26, and her little sister Bella Hadid, 24, have not only remained supermodels at the top of their game, but they’ve stayed the best of friends.

After Gigi became a mum to baby Khai – with Bella by her side – her younger sibling only had more inspiring words to say about her sis.

And when Gigi celebrated her first birthday as a mama when she turned 26, Bella filled her Insta with dedication posts that were too cute – and too cool tbh – for words.

We’re taking a look at some of their sweetest sibling moments, as well as times they proved their vibe is on a whole other level.

Bella was watching out for her sister as usual when they stepped outside of Gigi's apartment to get a takeaway cheese toastie as part of the new mum's birthday celebrations.

With swarms of paps on the street outside Bella quickly moved Zayn's hand from his girlfriend's behind to keep the photographers from getting more than they bargained for.

Bella holding on to her sister as their friends and family sang happy birthday is a clip we've watched multiple times.

Just look how excited Bella is for her sis!

During Gigi's pregnancy with daughter Khai Bella was so excited for her and Zayn that she couldn't help sharing her "burger" bump of her own.

In a side by side snap of the girls clutching their stomachs, Bella wrote on Insta: "June 11, 2020...two buns in the oven except mine is from my burger and gigi’s is from @zayn. I love you both so freaking much -can’tstopcrying [sic]."

It's not rare for a model to lose her shoe on the catwalk and that's exactly what happened to Gigi, who didn't let it faze her and carried on like a complete natural.

At the end of the show Bella put her arm around her sister to ensure a smooth close to the show.

Watch from 14.09 to see the literal supportiveness.

The Victoria's Secret Fashion Show may no longer be a thing, but seeing Bella and Gigi kill it both on and off stage in 2018 was truly impressive.

It's a sisterhood we should all take inspo from! 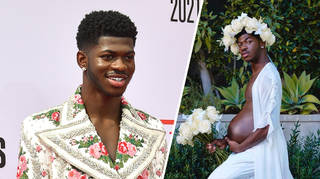