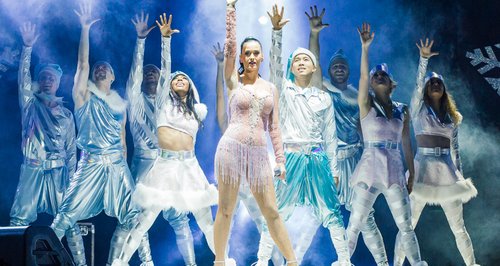 Rizzle Kicks, Olly Murs and Ellie Goulding were among the other acts who played the first night show.

Katy Perry, Tinie Tempah and Disclosure were just some of the many incredible acts to perform on night one of the Capital FM Jingle Bell Ball 2013.

The first night of this year's huge music event at London's O2 Arena kicked off with a pre-show set from DJ Fresh and a set from Little Nikki before opening act Olly Murs took to the stage to perform all of his fan-favourite hits, including a surprise appearance from Rizzle Kicks for 'Heart Skips A Beat'.

View a picture from Olly's set below (Credit: Danny North):

James Arthur then wowed the crowd with performances of his recent chart smashes as well as a cover of Miley Cyrus' worldwide hit 'Wrecking Ball, before Rizzle Kicks arrived for their own set including tracks like 'Lost Generation' and 'Mama Do The Hump'.

It was then Ellie Goulding's turn to bring the music, after wowing photographers on the red carpet with her dressearlier in the night, and the UK star made sure all eyes were on her for performances of songs like 'Anything Could Happen' and 'Burn'.

After Ellie's set it was time for Union J's Jingle Bell Ball debut, which saw them performing a festive medley of Christmas songs as well as hits like 'Carry You' and 'Beautiful Life'.

See what Ellie's stage outfit was like below (Credit: Andy Squire):

Naughty Boy was joined by some huge guests like Ella Eyre and Sam Smith for his set, before the JBB crowd was treated to a surprise performance by Elyar Fox of his upcoming single 'Do It All Over Again'.

Tinie Tempah kept up the pace next with some massive performances of songs including 'Drinking From The Bottle' and 'Children Of The Sun' with John Martin.

Disclosure kept the special guests coming with stars like Eliza Doolittle, Sam Smith and Aluna Francis all heading out at various points in their set.

Katy Perry then rounded off night one of the Jingle Bell Ball with a fan-pleasing set of hits from across all three of her albums, ranging from her debut 'I Kissed A Girl' to more recent singles like 'Unconditionally' and her set closer 'Roar'.