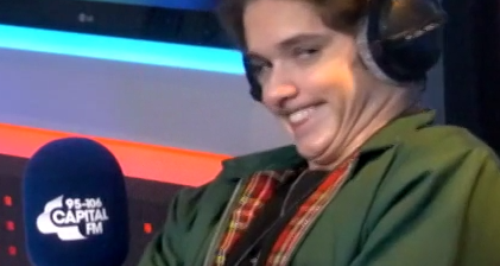 Hopefully Brad will pull THIS face at the Capital Jingle Bell Ball...

Whether you're in the arena or watching from home, there's going to be lots to watch out for… We've picked out some facial expressions to expect from our stellar Jingle Bell Ball line up.

Check out some of these performance faces we've spotted from Taylor Swift, Sam Smith and Union J - and hope to see again on December 6th & 7th.

Taylor Swift is the queen of sass, so much so even her nods are sassy!

We won't be the only ones freaking out over the #CapitalJBB. Expect this face demonstrated by Danny O'Donoghue from The Script.

There are some big voices on stage this year meaning some big notes, so expect to see a lot of this from the likes of Jessie J, Sam Smith and Ella Henderson.

Sometimes artists forget they're on stage of London's O2 Arena and get TOTALLY lost in a song. Just check out the concentration on Sam Smith's face.

*Smiling with your eyes, a term made famous by Tyra Banks. However Josh Cuthbert from Union J is pretty good at it too.

Imagine locking eyes with George Shelley and him do this. It COULD happen at the Jingle Bell Ball!

How do you even stand up straight when Luke Hemmings makes THIS face?! We want to give him cuddles!

Jingle Bell Ball 2019: From Taylor Swift To Sam Smith - The Best On Stage Moments From Sunday At The O2