Everybody stop what you're doing. Shawn Mendes might now be a taken man and honestly, it could be the cutest thing we've ever seen.

Last night was the night of the year every A list celeb waits for and every normal person stays awake refreshing their feed for - the annual Met Gala - and last night did not disappoint.

Hundreds of celebs descended into the bash, styling themselves on the theme 'heavenly bodies' and we were treated to the usual onslaught of weird and wonderful outfits.

But literally none of that actually matters, as something much more important went down at the charity gala which costs over £200,000 a table. Shawn Mendes and Hayley Baldwin arrived at the bash together and fuelled relationship rumours by holding hands and basically being the cutest people in the world, whispering and giggling together as they walked the red carpet. 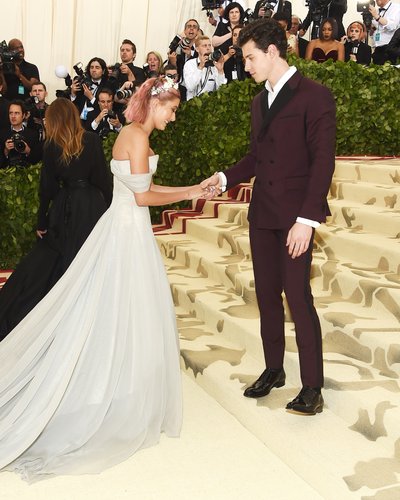 As if the 'In My Blood' singer wasn't already the perfect guy, Shawn followed behind Hailey, watching not to tread on her designer gown, even spreading it out for her to take pictures and walking backwards holding her hand as she walked up the stairs.

We can't tell if we're ecstatically happy for the pair or about to burst into tears, safe in the knowledge that it'll quite literally never be us, cos' if this really is a thing, it's some serious #CoupleGoals.

Why not watch Shawn Mendes try his best to do a British accent...