People have been questioning Jesy's notable absence from the girls's antics lately but she's hit back at rumours of a split!

For weeks now, fans have been flooding Jesy Nelson's social media asking why she has been so absent, both online and from the rest of Little Mix's antics on nights out and whilst in Japan.

Jesy has finally replied to a fan on Instagram to deny their worries Little Mix are on the verge of splitting, telling them not to believe anything they hear unless it comes from the girls themselves. 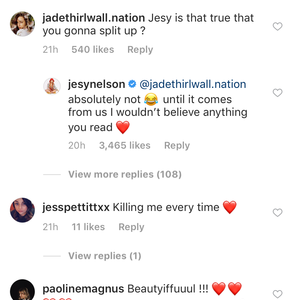 There are fears that Jesy is focussing her attention on launching her Hollywood acting career, having taken child extra acting jobs when she was younger.

The Sun also reports she become excited when bandmate Jade Thirlwall was shortlisted to play Princess Jasmine in Aladdin last year and has seen the success of fellow X factor stars like Harry Styles in Dunkirk and wants to follow suit.

Although fans have been wondering just where TF Jesy has been recently, we highly doubt acting dreams or a split are on any of their minds right now as they've confirmed they have a new album on the way!

We've missed Jesy on social media, though, and glad she's back with these firrrre selfies!