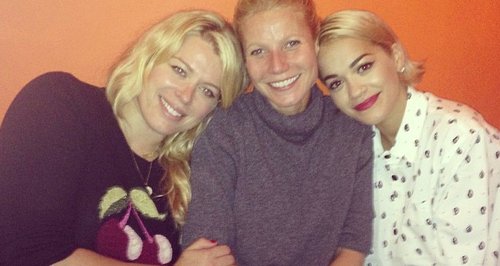 The 'Radioactive' singer and Gwyneth chatted for hours on their dinner date in California.

Rita Ora was spotted dining out with Hollywood A-lister Gwyneth Paltrow this week in Los Angeles.

The 'R.I.P.' singer was pictured for the first time with the Iron Man 3 star on Thursday night (19th September) as the pair intently chatted over dinner.

Rita and Gwyneth arrived separately to the Night Market Restaurant on Sunset Boulevard in LA, but were pictured joking and talking away for some time at the eatery.

The 'Radioactive' star dressed in a white patterned shirt and tiny shorts paired with over-the-knee boots for their dinner date, while Gwyneth kept her look simple with a jumper and skirt combination.

Though the pair have never been spotted out together before they are both friends with Jay-Z, with the rapper being Rita's Roc Nation boss as well as being close friends with Gwyneth's husband Chris Martin from Coldplay.

This week Rita was also spotted spending time with boyfriend Calvin Harris out in Los Angeles, fresh from enjoying the festivities of New York Fashion Week.

Rita Ora is currently working on her second studio album, expected to be announced before the end of the year.