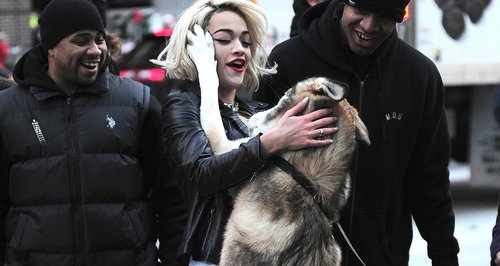 The 'Radioactive' singer was spotted making a new pal on the set of her DKNY shoot in Times Square.

Rita Ora made a new friend on the set of her latest fashion photoshoot this week in the form of a giant German shepherd dog.

The 'R.I.P.' singer was pictured petting and cuddling up to her new canine pal in between takes on her DKNY shoot out in Times Square in New York City on Monday (16th December).

Dressed in a biker jacket and jeans during some time out from the shoot, Rita giggled as the dog jumped up on his hind legs to lick her face.

Check out a picture of Rita Ora making a new friend on the set of her latest fashion shoot below:

Later on Rita opted for a red strapped dress and bright red lipstick as part of her shoot with the fashion brand.

Rita Ora was also on the set of her Material Girl photoshoot last week in Los Angeles.