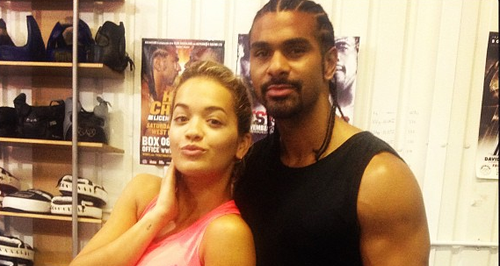 The 'Radioactive' singer showed off how much her fitness regime has been working this week.

The 'R.I.P.' singer hopped into the ring this week with the former British heavyweight champion at his Hayemaker gym in North London, where she practiced her hooks and jabs alongside the sports star professional.

"Great fun today at the Hayemaker Gym training with the very fit & lovely @RitaOra," David tweeted shortly after the pair's workout session together.

Rita was then seen leaving the gym in a cropped top that showed just how much her heavy exercise regime has been improving her body, with a defined stomach clearly on show.

Check out a picture of Rita Ora looking toned after her workout session below (Credit: INF Photos):

Over the weekend the 'Shine Ya Light' singer showed off a brand new look when she debuted a braided hairstyle for her performance at the Lytham Proms Festival up in Lancashire.

Check out an action shot of Rita Ora boxing with David Haye below (Credit: Instagram):

Rita Ora is currently working on her second studio album, the follow-up to 2012's 'ORA'.

Watch Rita Ora sparring with David Haye in the video below: