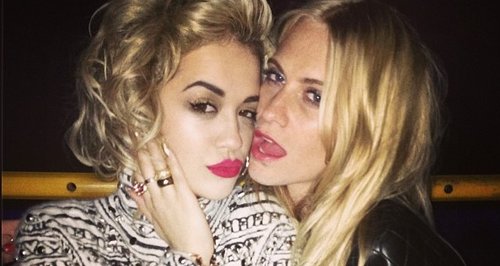 The 'Radioactive' singer partied until the early hours afte her performance at the charity gig.

Rita Ora made up for best friend Cara Delevingne being out in Spain over the weekend by partying with her sister Poppy Delevingne in central London.

The 'R.I.P.' singer performed live at the Chime for Change concert at Twickenham Stadium on Saturday night (1st June), and celebrated after with a night on the town alongside Cara's older sister.

Rita opted to go monochrome for her night out in a black and white floral print dress and large boots, while wearing her blonde hair down.

She performed earlier in the day on a bill boasting performances from the likes of Beyonce, Jennifer Lopez and Haim.

Check out a picture of Rita Ora on her night out after the Chime For Change concert below:

Rita's best friend, and Burberry supermodel, Cara Delevingne was out in Barcelona, Spain over the weekend hanging out with Rihanna on her 'Diamonds' world tour.

Rita Ora is currently working on her second studio album, the follow-up to 2012's 'ORA'.