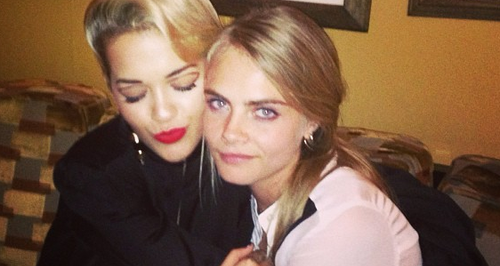 The 'Radioactive' singer was clearly having a great time on her night out in the UK capital with Cara.

Rita Ora and Cara Delevingne put rumours of a feud between them to rest this week when they enjoyed a night of partying after the GQ Men Of The Year Awards.

'R.I.P.' singer Rita attended the awards ceremony in the early evening on Tuesday (3rd September), before meeting up with her "wifey" to dine out with fellow pop pal Ellie Goulding.

Rita changed out of her red carpet dress, a black and yellow zebra print outfit, and into a simple black retro style dress to continue the night with her close friends, eventually heading to Soho's Groucho Club with the Burberry model.

The pair then finished off their night in the early hours of Wednesday morning by grabbing some fast food at McDonalds before heading back together to Cara's London house.

Check out a picture of Rita Ora and Cara Delevinge at the end of their night below (Credit: Splash):

Rita and Cara faced persistent rumours this summer that their friendship had cooled in recent months, following claims that the pair actively avoided each other at several festivals recently.

Rita later took to Twitter to heap words of praise on her friend Cara after their big night out together, posting: "I'm so proud of youuuuuu @caradelevingne#missedupetal."

View a picture of Rita Ora and Ellie Goulding together on their night out below:

However, the two stars' night out saw them clearly comfortable in each other's company, with them spotted sharing a joke in the back of a taxi with 'Burn' singer Ellie Goulding.

Rita Ora is currently working on her second studio album.