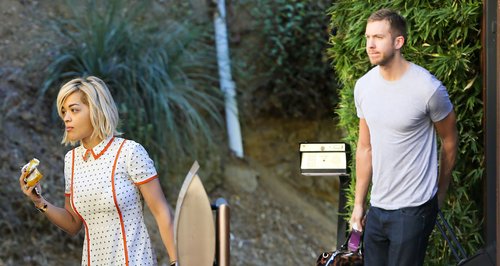 The 'R.I.P' singer speaks about the support and great knowledge of the Scottish DJ as she continues work on album two.

Rita Ora has told Capital that her boyfriend Calvin Harris is helping her with her new studio album.

The 'Shine Ya Light' singer has been busy in 2013 working on the follow-up to her debut and told us it's great to have the "reassurance" of someone with Calvin's expertise.

"You know it's just so nice to go out with somebody who has such a great history and real good experience on music and I really kind of trust his view," she confessed. "It's just really nice to have that reassurance and so I've had a lot of help from him and it's really refreshing because this album is I think is going to blow people away – well I hope so."

Asked if the Scottish DJ is honest in his approach, she added: "Yes, Calvin's very good at knowing what's good and what's not."

Listen to Rita Ora speaking to Capital's showbiz reporter Kevin Hughes about her next studio album below:

The pair were both in attendance for last weekend's MTV Europe Music Awards and Rita also told Capital how thrilled she was to have presented the Best Hip-Hop prize to rap royalty Eminem.