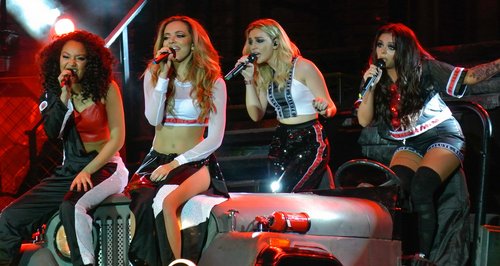 Fresh from the final UK tour date on the girls' 'Salute' tour, check out the best pictures, tweets and videos from the fans about the incredible tour show.

Little Mix brought the UK tour dates on their 'Salute' tour to a close last night (9th June) out in Belfast and it was an emotional affair, with fans bringing the girls close to tears after the curtain fell.

#Mixers from across the Internet have been tweeting and sharing their snaps and videos for the past few hours as they look back on the 'Salute' tour and the memories they have of Leigh-Anne, Perrie, Jesy and Jade hitting that stage.

Check out 14 highlights from the final night of the 'Salute' UK tour, including some messages from the girls themselves!

Perrie may have a wedding to plan, but that doesn’t mean she won’t miss performing every night with her bandmates!

Tomorrow's the last show of our #SaluteTour :'( Some amazing memories with the girls and all of you! See you tonight Dublin Perrie <3

Zayn was in Belfast last night with Perrie for her final Salute tour show <3 <3 <3 #Haidy_Payne http://t.co/HjJxgmgQKS

The crowd goes wild (and who could blame them?!) as the band descend onto the stage like some sort of G.I Janes…

Clearly it was an emotional night, as one fan spotted Jesy shedding a tear at the final UK show :(

Jesy crying tonight while the girls were hugging her #SaluteTour pic.twitter.com/NGsgjG3tVt

Can't believe the salute tour uk and Ireland is over already. Let's go back to their first show in Birmingham pic.twitter.com/uuedgYGbDY

We’re sure @believeleigh speaks for ALL the Mixers out there who don’t want the Salute tour to end!

I want to relive the salute tour over again and again

Don’t cry because it’s over, babes, smile because it happened!! (But we totally get what you mean!)

Didn't the Salute Tour just start???? HOW IS IT OVER ALREADY pic.twitter.com/iAvnoJrY8d

This fan thinks Little Mix’s tour blows everyone else’s out of the water. Do you agree?

the salute tour was so amazing, it slayed everyone else's tours

The petition for Little Mix to play at least four shows a day for the rest of eternity starts NOW!

Awww, a lovely tweet from a very proud Mixer!

Little Mix have grown so much! And the Salute Tour has definitely showed how strong and womanly they are! -Hal pic.twitter.com/4EwEwTEwKk

This girl has the right idea! We’re already way too excited for what’s next…

Guys the Salute Tour was amazing but can you imagine the next one I choose the right band. I just need to meet them now.

That’s the spirit! Little Mix have still got the whole of America to take over!!

And after the show, there’s the afterparty! The foursome looked incredible as they celebrated the end of their tour. Our invite must have gotten lost in the post…