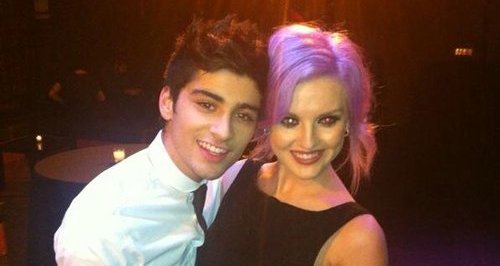 The 'DNA' singer also speaks about her wedding plans and juggling a busy schedule.

Little Mix singer Perrie Edwards has revealed that fame is harder for her fiancé Zayn Malik than herself.

The girl-band star told Metro that she manages to keep as much of a normal life as she can but the One Direction man finds it tough due to his level of fame.

"When you're in this industry life's never going to be normal. As much as you try," she said. "I do whatever I want. I go shopping all the time. I go out for food. Go out with my mates.

"I do everything normally but obviously Zayn is really famous so it's harder for him but we still do what we want to do."

The couple announced their engagement back in August – shortly after the world premiere of One Direction's film This Is Us.

Perrie also revealed that wedding plans are on hold until they decide on a date.

She said: "I haven't started planning the wedding yet. I will get an idea of what I want once I have a date. Right now we are so busy. They're so busy, we're so busy so I haven't got the time but as soon as I am ready I will let everyone know."

Meanwhile, Little Mix were seen on TV this weekend as they gave a triumphant performance of new single 'Move'.

The track is taken from second album 'Salute' – which is out next week.