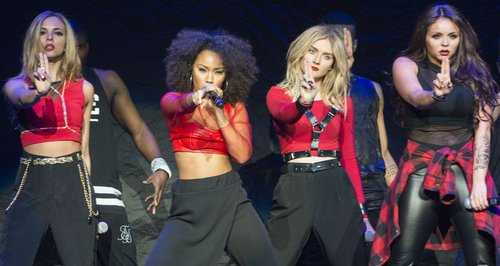 The girl band admit discussions have taken place about teaming up with the 'Midnight Memories' stars.

Little Mix have revealed that there have been talks about a potential joint tour with One Direction in the future.

The 'Move' four-piece say they have discussed plans for a team-up down the line, but admit it's unlikely to happen just yet because of their hectic work schedules.

"There was talks about it but it just clashed," Jesy revealed to MTV News this week. "We are so busy, and god they are really, really, busy.

"But you never know though, but for now, no," the Little Mix star sadly admitted.

The 'Little Me' four-piece also opened up about their own headlining UK tour, which kicks off in May this year.

"I think with our own tour, we get to have tour outfits and stage production, it's going to be , like, a million times more vamped up," Jesy teased. "We are so excited because we've worked so hard on our ideas and everything that we want and how we want it to be and the theme."

Little Mix return to the UK soon after their final supporting dates on the 'Neon Lights' tour.