WATCH: Little Mix Tease One Of Their Brand New Songs – And It Sounds SO Good

The ladies have been hard at work in the studio on album three – and have finally given us the first glimpse at what their new music will sound like.

We have been waiting for this moment for what feels like forever – or at least ever since we found out that Little Mix were officially back in the studio and working on album number three… The girls have finally released a clip of one of their new songs!

Jesy Nelson, Perrie Edwards, Leigh Anne Pinnock and Jade Thirlwall released a sneak peek of one of their new songs on their Youtube channel, which sees the girls in a recording studio singing the lyrics "Gotta get him out of my hair" - complete with hilarious dance moves!

And it's not the first time the girls have teased us with a possible peek at their new sound, recently posting this on Instagram:

The girls posted the cryptic video of them dancing to a never-before-heard new song – sending the Internet into a frenzy that we MAY have just heard one of their new tracks.

While the one above has apparently been denied by their label, a little search of the lyrics heard in the video doesn’t come up with anything – suggesting this is indeed a new song of some sort! 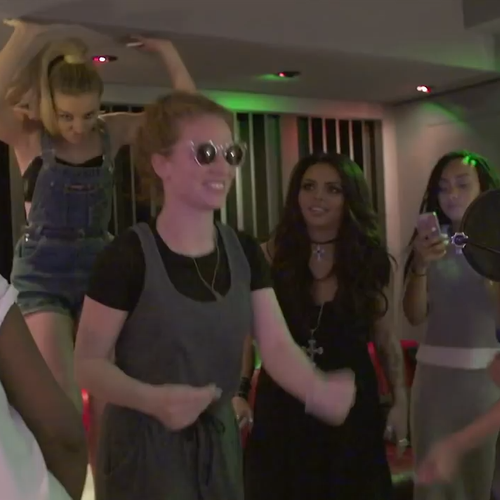 While we’ll have to wait and see if this is the first release, we are definitely LOVING the R&B vibes, something Jess Glynne told us we can expect more of from the girls, after she worked with them on their forthcoming album.

We literally can’t wait for this utter sass-fest to drop!