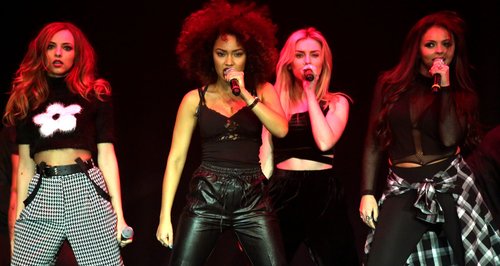 The 'DNA' stars are seen on the set of their second music video from 'Salute'.

Little Mix have unveiled several teaser shot from the music video for their brand new single 'Little Me'.

The 'Wings' four-piece, who are set to perform live at the Capital FM Jingle Bell Ball 2013 this weekend, revealed the teaser pictures online this week after wrapping the video shoot.

"Wow what a day! Just finish the #LittleMixVideoShoot very exciting, can't what for you to see it," Jade Thirlwall posted last night (2nd December), while Perrie Edwards posted: "What an eventful day! Love the video, can't wait for you to see it Mixers!"

Check out a snap of Perrie on the set of the video below (Credit: Twitter):

Last month Little Mix confirmed that 'Little Me' will be their second single from their 2013 album 'Salute', after recent release 'Move'.

View another snap from the 'Little Me' video shoot below:

Little Mix have also this week announced their biggest ever tour for 2014 with 14 dates starting on 16th May in Birmingham, with tickets on sale from Friday 6th December.

[[ This video has been removed ]]
Little Mix on MUZU.TV.