Little Mix Say They Would Love Beyonce To Adopt Them: "Blue Ivy Is So Lucky!" 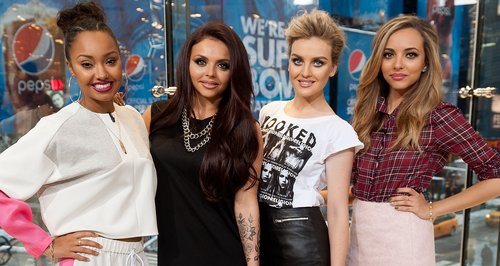 The 'Little Mix' stars joke about which pop star they would want to be adopted by.

Little Mix have named Beyonce as the pop star they would most like to be adopted by, declaring that daughter Blue Ivy is "so lucky".

The 'Word Up' four-piece opened up about their love for 'XO' singer Beyonce over the weekend, while responding to fan questions.

Leigh-Anne Pinnock gave an answer of Beyonce when asked who she would pick to be adopted by, with her bandmates quickly agreeing.

"That kid is so lucky, seriously," Jesy Nelson told MTV News, referring to Beyonce's 2 year-old daughter Blue Ivy. "Imagine if your dad is Jay-Z and your mum is Beyonce.

"It can't get better than that," she declared.

Perrie Edwards also gave fans another update on wedding plans for her and One Direction star Zayn Malik's nuptials.

"I have no idea, like, literally, I haven't gotten a clue what's going on," she revealed. "I mean, planning a tour, planning this, planning that, I haven't had time really, but I think I'll get into it."

> Will Little Mix go on tour with One Direction?

Little Mix released their music video for new single 'Word Up' earlier this month, and are currently supporting Demi Lovato on her 'Neon Lights' tour.