WATCH: This Fan's Reaction To Ariana Grande Touching His Hand Is Golden

When Ariana Grande reached out and touched a fan's hand during her Sweetener concert, he couldn't quite believe his luck.

Ariana Grande's Sweetener Tour has touched down in the UK and the British fans are out in their thousands- and as she touched on fan's hand during her concert, his reaction was so priceless that the video is going viral.

ariana touched his hand i’M DEAD THIS IS SO ME pic.twitter.com/wRo7VfpUGv

Recording the moment after the 'Boyfriend' singer touched the fan's hand- he stands with his mouth a wide 'O' whilst staring at the lucky hand, looking at the camera in astonishment, and it might just be our favourite video we've ever watched.

Twitter user @ringslust wrote: "ariana touched his hand i’M DEAD THIS IS SO ME" and we just want to say it's us, too.

It seems every British A-lister under the sun has been heading to the O2 for Ari's performance, including Harry Styles and Millie Bobby Brown, who were spotted having an animated conversation (which we really want to know the topic of!)

The star tweeted: "thank u london for three beautiful sold out shows at the o2 🌫 what a special way to start this leg !!!! see u for two more next month. amsterdam, you’re next. love u."

She also retweeted this absolutely iconic video of her mum, Joan, bopping away to 'Into You' alongside fans, which proves even her own mum can't stand still whilst listening to her tunes!

JOAN IS SO CUTE ARE YOU KIDDING ME pic.twitter.com/ISjOSEXrdb

Ari will also be performing at Manchester Pride this August bank holiday weekend and we honestly can't wait to see what she brings to the show!!

thank u london for three beautiful sold out shows at the o2 🌫 what a special way to start this leg !!!! see u for two more next month. amsterdam, you’re next. love u. 🏹☁️ pic.twitter.com/qEBpEAh1oF

Ariana Grande Tattoo Guide: How Many Does She Have Pokemon & Butterfly Inks Revealed 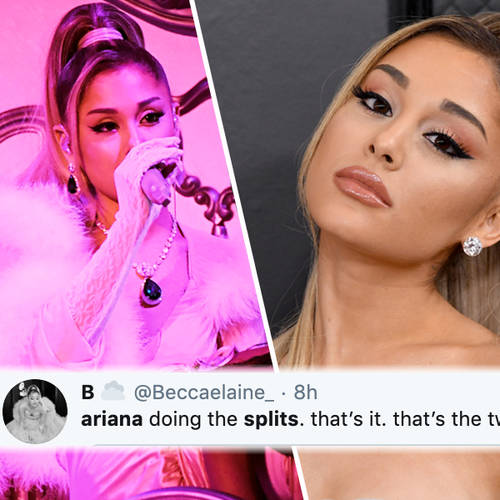