Here's the lowdown on Liberty Poole's dating life after she appeared on Love Island...

Liberty Poole was one of Love Island's breakout stars last summer after her whirlwind experience in the villa captured the public's hearts!

She became one the highest-earning contestants to ever appear on the hit dating show after being met with a barrage of lucrative offers upon her exit – she's even appearing on the latest season of Dancing On Ice.

She may not have found love in the famous Majorcan villa, but how about out of it?

Here's the lowdown on Liberty's relationship status; does she have a boyfriend, and what's her love life been like since her stint on Love Island?

Rumours began to whirr in November that the Birmingham beauty could be dating her fellow Islander Brad McClelland.

Liberty, 22, and Brad, 26, both appeared on season seven on Love Island, however, they never coupled up during their time in the villa.

The pair were spotted celebrating the reality star's 22nd Birthday in November, sparking speculation that they could have grown to be more than friends.

Liberty shared a snap of her posing with Brad to the 'gram and everyone was quick to point out how good they looked as a couple in the comments!

She captioned the post: "Thanks to everyone for making my 22nd the best birthday ever! all love always."

After being seen together at an influencer event in London, Liberty and TOWIE star Joey Essex were rumoured to be seeing each other.

At the Skinny Tan party – a cosmetics company that Liberty is brand ambassador for – the TV personalities happily posed together for the paparazzi, with a slew of cute snaps of the friendly pair making their way online.

A source told The MailOnline: "They did have a couple of drinks and a laugh at Liberty’s Skinny Tan launch party at STK Westminster."

Liberty and Jake Cornish were one of season seven's most promising couples in the villa before their romance broke down.

The pair were coupled up from day one, spending an impressive seven weeks together before deciding to opt out of the show after the authenticity of Jake's feelings were called into question.

The 22-year-old didn't leave Love Island with a boyfriend but she has seen a great deal of success since leaving the show! 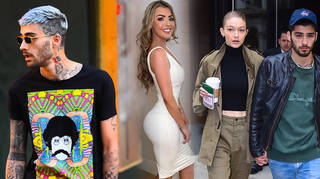