Whether it is Justin's support act, set-list or dates, we've got you completely covered for the biggest tour of the year.

Justin Bieber kicked off his highly anticipated brand new world tour on the 9th March 2016 with a show in Seattle that pretty much blew EVERYONE away. However, it has been a long time since then and the British #Beliebers are starting to get itchy feet as the main man prepares to bring his shows to the UK.

Amazing first night! Congrats @justinbieber and all of the team! Just the beginning. #purposetour JB killed it! Vancouver next :)

Justin's support act for the U.S dates has been 21 year old New Yorker Post Malone however joining the 'Sorry' star on the European leg of the tour will be electronic duo The Knocks.

Check out The Knocks' single 'Classic' which has racked up an impressive 2.2 MILLION views on Youtube.

Justin’s wardrobe for the new show sees him rock a long grey jacket, plaid shirt with a white tee underneath and simple skinny jeans, before changing into a red and black plaid shirt for performances later on in the night. You are REALLY in for a visual feast when it comes to style.

If you'd like to know exactly how the man himself performs No.1 single 'What Do You Mean?' live, then look no further than the video below which shows Biebz leaving the crowd amazed on the opening night...

Justin announced the UK leg of his ‘Purpose’ tour back in December 2015, confirming he’ll play a whole host of dates up and down the country in October 2016.

Justin kicks off the UK leg with shows at London’s The O2 from 11th October before performing across Birmingham, Manchester, Sheffield and Glasgow.

If his previous 2016 tour dates are anything to go by the set-list will most probably resemble something very similar to this:

Check out Justin Bieber’s new UK tour dates for 2016 below:

Tickets are on sale now and you can buy them right here: 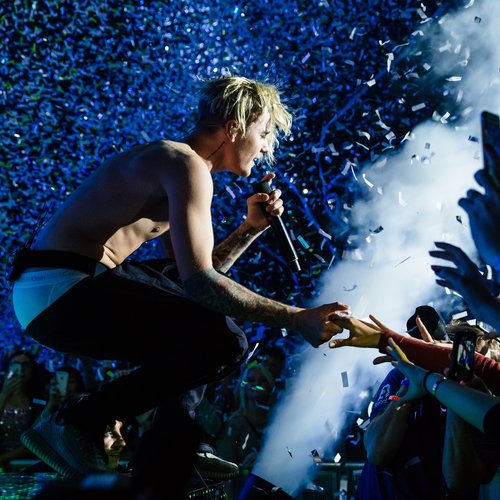