Prepare to up your selfie game, because things just reached an entirely new level.

Apple has introduced a new selfie term you’re going to want to get familiar with – slofies.

As the brand unveiled a series of new products and updates to its current software on Tuesday 10 September, they coined the word slofies – a slow motion selfie which can be taken on the new iPhone 11’s front facing camera.

Within moments of the slofie being explained, it of course went viral on Twitter and there have been some hilarious reactions.

Meanwhile, we’re preparing to see a lot of these wind-machine style clips all over our Insta feed…

I’m a fan of the ad, but not of the term #slofie… who said
“This is how we get the kids to want an #iphone11”#appleevent pic.twitter.com/OWBRaFvWQj

In the past we’ve had the duck face pout, the hair curtain, the claw hand and the ‘I’m bored’ face, but slofies will no doubt be the next thing to be attempted by influencers.

We can already see the beauty bloggers using the feature to flaunt that Fenty glow on their cheekbones.

However, some Twitter users aren’t a fan of the slofie and made sure to air their dislike for the new pose tactic on social media.

“Stop trying to make ‘slofies’ happen” one person warned, as another said: “Please un-invent this.”

Some also think they were the ones to invent the slofie.

Whether you’re a fan or not, we know you’re going to attempt the slofie if you get your hands on the iPhone 11.

> Download Our App For All The Latest News And Trends 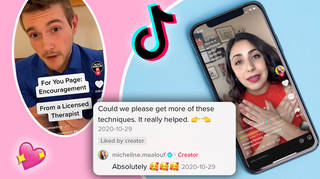