WATCH: Gigi Hadid Pulls Off Epic Surprise Party For Joe Jonas – With All His Celeb Pals

Gigi set up an epic games of girls vs boys football for Joe’s 26th – and they were joined by the likes of Taylor Swift, Kendall Jenner and Nick Jonas.

GI Joe are fast becoming one of the cutest celeb couples around – and just wait until you see what Gigi Hadid managed to organize for Joe Jonas’ 26th birthday.

Nick Jonas And Kendall Jenner Are Dating! And It's All Thanks To Gigi Hadid

Gigi got all of Joe’s celeb mates together for a massive girls vs boys football match at the L.A. Galaxy home ground – and a blindfolded Joe had no idea any of it was happening!

The model got everyone from Taylor Swift to rumoured couple Nick Jonas and Kendall Jenner involved, and the look on Joe’s face when his pals popped up to shout ‘surprise’ is quite something!

Happy early bday to @joejonas. Hands down one of the greatest dudes on the planet. Truly blessed to able call you brother. Luv ya my dude!! Now let's play some soccer.

Gigi threw the party on Monday – and it’s not surprising Joe wasn’t expecting it… being that it was five days before his actual birthday!

Thank you for the best surprise ever. I love All these people. #megasquad

It takes a brave woman to invite your boyfriend’s ex to their party, especially when said ex is Taylor Swift, but it looks like the group are all good mates despite their history.

A spokesperson for the L.A. Galaxy told E! that the club had provided the group with locker room access, jerseys and a grass field with lights to play on for the celebration. 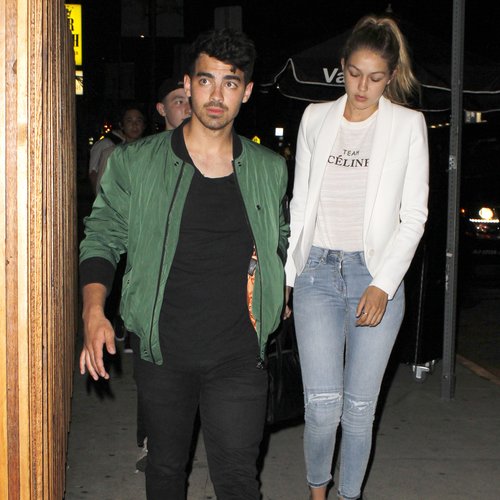 We reckon these two are on for the long haul – now what is Joe going to do for Miss Hadid’s next birthday to measure up to this?!