Millie Mackintosh is pregnant with her first child, a baby girl.

Former Made In Chelsea star Millie Mackintosh and husband Hugo Taylor are expecting their first baby, with the reality stars announcing Millie’s pregnancy on Instagram alongside a photo of Millie cradling her bump.

Millie unveiled the news in a shoot with Hello! magazine, posing in a figure-hugging satin dress to highlight her blossoming bump.

In her interview with the publication Millie said she already knows the sex of their little one, revealing they’re expecting a baby girl.

"I feel very lucky. I can't wait to feel that bond and for her to sleep on my chest and breathe in that baby smell,” she said.

Millie added: “She’s got long legs – Hugo thinks she’s going to be really tall like him. I’m so excited it’s a girl. I would have been delighted with either, but when I found out we were having a girl, I suddenly realised this is what I really wanted.”

The couple’s next chapter comes over a year after they married in July 2018, in a stunning ceremony at Whithurst Park in Surrey.

So excited to announce that we're expecting!!! For a sneak peek of the @hellomag photoshoot visit the link in my bio. On the shelves from tomorrow! 🤰🏼👶🏼💗

Millie and Hugo were friends for years before they started dating on Made In Chelsea, with things coming to a dramatic end when he slept with her best friend Rosie Fortescue – who was a bridesmaid at their wedding last year.

She then moved on to Professor Green whom she later married, but they announced their split in February 2016 after six years of marriage.

The star and the rapper broke up after “finding themselves on different paths”.

Months later she rekindled her romance with Hugo and they were engaged a year later. 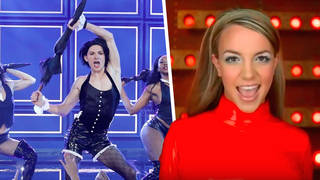