Billie Eilish has issued a statement apologising for mouthing a racist slur in an old video which appeared on TikTok.

Billie Eilish took to Instagram Stories to say she is “embarrassed” that she mouthed an anti-Asian slur when she was “13 or 14” while singing along to Tyler the Creator's song 'Fish'.

In a lengthy statement, Billie said she was speaking out because fans asked her to address it but also “this is something I want to address.”

“I am appalled and embarrassed and want to barf that I ever mouthed along to that word,” she wrote.

“This song was the only time I’d ever heard that word as it was never used around me by anyone in my family,” Billie added, referring to the song which was released in 2011.

In the resurfaced video, which appeared on TikTok, Billie was also seen speaking in different accents.

But she insisted in her statement it was “in no way an imitation of anyone or any language, accent, or culture in the slightest.”

She added: “Anyone who knows me has seen me goofing around with voices my whole life. Regardless of how it was interpreted I did not mean for any of my actions to have caused hurt to others and it absolutely breaks my heart that it is being labeled now in a way that might cause pain to people hearing it.

“I not only believe in, but have always worked hard to use my platform to fight for inclusion, kindness, tolerance equity and equality,” Billie continued.

She signed off by thanking fans for reading her statement. 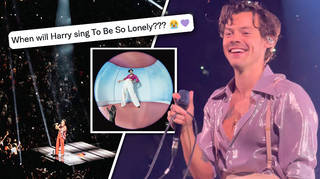 Why Harry Styles Won’t Perform 'To Be So Lonely'

QUIZ: Answer These Pop Questions And We’ll Tell You What Dorm Makeover You Need