V Festival 2017: Catch All Of The Weekend's Incredible Action From The Backstage Area!

We're backstage at V Festival all weekend - keep up with all the stars right here!

It's one of the biggest weekends of the year, and we're coming to you LIVE from V Festival... and we know you're not going to want to miss a single moment!

YAS! Don't Miss A Single Second Of The Action From This Weekend's Virgin V Festival!

If you didn't manage to get tickets to be there, we've got the next best thing for you - so make sure you keep it Capital as we'll be chatting to all your fave celebs!

Jason Derulo took on Jay Z's 99 Problems challenge - but can he beat James McVey from The Vamps?!

We pranked the stars, making them think they were singing their songs in Spanish... but they weren't!

How cute are Love Island's Chris and Kem though?!

Roman and Bassman took to the skies... rather them than us!

The rain might have set in over V Festival, but Louisa brought all the sunshine in that smile!

You could literally bottle @louisa's smile, sell it and be a millionaire by the end of @vfestival #VFestOnCapital pic.twitter.com/Bz6HgTGujR

Stormzy took to the stage and brought out Lethal Bizzle!

THIS is happening right now! @Stormzy1 has arrived #VFestOnCapital pic.twitter.com/sXXsdUiB3I

We found out JP Cooper has a family history of being in the ice cream trade... but can he beat James McVey to make the biggest 99?!

Clean Bandit's Grace Chatto BOSSED the voice jammer... but how did she do with the ice cream challenge?

Sean Paul is an awesome musician but everybody struggles when you put a huge delay on their headphones... him taking on the voice jammer is too funny!

Anne-Marie took on Jay-Z's 99 Problems... and smeared most of her ice cream over Roman Kemp's face!

We've got a feeling only @AnneMarieIAm could get away with smearing ice cream on @romankemp's face (her reaction though ) #VFestOnCapital pic.twitter.com/xuZZg9GapI

James Arthur chatted to us backstage... and managed to get ice cream all over our lovely set - d'oh!

Ella Eyre took on the Rucksack Challenge and it's safe to say neither she nor Roman looked too good after dressing up in our hideous array of mismatched-festival garb!

Anne-Marie and Roman Kemp went undercover as security guards and they weren't letting just ANYONE into the VIP area!

Is it just us or do these two security guards look a little familiar?! @AnneMarieIAm & @romankemp we're looking at you #VFestOnCapital pic.twitter.com/WumOvPy4em

Roman took us on a tour of V Festival - including the bits you don't normally get to see, backstage!

Rudimental's Whisper Challenge was a lesson in lip-reading:

The Vamps' James McVey proved size definitely matters when he took on Jay-Z's 99 Problems... and he had no issues creating a ridiculously large 99 ice cream!

The Vamps competed to lose their V Plates... and it all went a bit wrong when there was a collision! 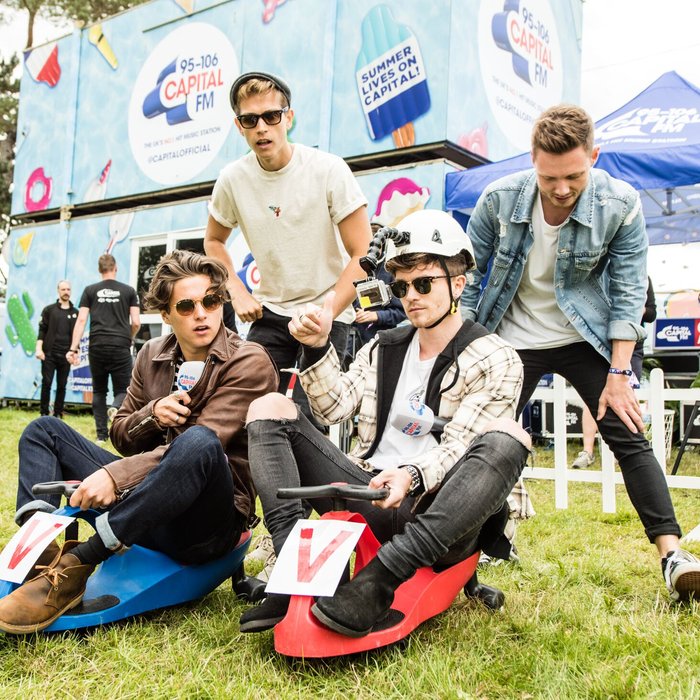 Roman Kemp got in the festival spirit with his own fancy pair of headphones (yes, he totally brought these from home...)

Will Cozens is ready to bring you all the goss from one of the UK's hottest festivals - all the stars will be in our backstage area!

We'll be live on air Saturday from 4-7PM where Will Manning will be bringing you all the backstage gossip as well as celeb interview with Capital Breakfast's very own Roman Kemp!

Then on Sunday from 7PM-10PM, Roman Kemp will be bringing you a Virgin V Festival special on the day the legendary Jay-Z takes to the stage!

Keep up with all the action on our social channels by following us on Twitter, Snapchat, Instagram AND Facebook to get the inside scoop on everything that happens both backstage and of course from the live performances.