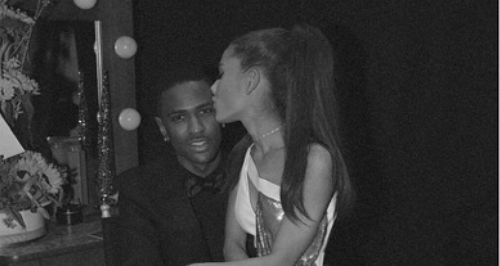 #Grammys2015 has been trending all day, and night, after another show stopping ceremony here's what YOU thought of this years 'shindig'.

From a loved up Ariana Grande and Big Sean to Madonna's outfit and Kanye West invading the stage, Twitter was the first to report and you had some pretty entertaining thoughts on the whole thing:

Just what exactly IS Katy Perry eyeing up?

@CapitalOfficial lol Katy is like where can I get those

Not everyone was a fan of Kanye at the Grammys

Is this still the #Grammys2015 or... pic.twitter.com/Nh3kQsNicN

#Sammys were also a thing

@CapitalOfficial yes I'm so happy for him weep done! @samsmithworld !!

Madonna's performance is blowing my mind already and so far I can only see the stage hands.

THIS picture of Kanye and Taylor had us all like :O

Another war ended while Barack was in office. #Grammys2015 pic.twitter.com/bFOmBqG8O5

Did Ed repeat his outfit from the EMA's at the Grammys?

"@ILlittlebirds: Some great shots from last night via @CapitalOfficial pic.twitter.com/ZTYzA1TpSq" hey that's what he wore on EMA right?

sorry but no to Kim's gown tonight #Grammys2015

On the subject of fashion, did Iggy Azalea take hair inspo from Taylor Swift?

@CapitalOfficial @IGGYAZALEA @taylorswift13 I love Iggy's dress but that hair so Taylor.

Hurry up with a new vid Taylor Swift, the world needs more of these moves in their life...