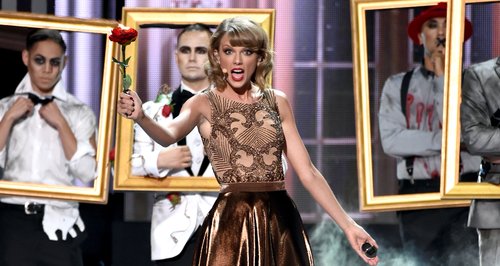 Taylor Swift stole the show at last year’s Victoria’s Secret Fashion Show – and she’s looking to do the same again at this year’s event!

Taylor Swift was definitely the most talked-about performer at last year’s Victoria’s Secret Fashion Show – THAT amazing Union Jack outfit, anyone? - so it’s no wonder the organisers were clamouring to have her back!

Wonder what I'll be singing at the VS Fashion Show tomorrow...

Taylor took to the social media site yesterday to post some sneaky hints in the form of lyrics alluding to her possible set list, including two tracks from her new album ‘1989’.

Taylor shared the lyrics, “Stolen kisses, pretty lies” and “Darling I’m a nightmare dressed like a daydream” from ‘Blank Space’ and “I got that good girl faith and a tight little skirt” from ‘Style’ which she captioned, “Or maybe even… #VSfashionshow”.

So it looks like we can count on at least two tracks from the new album, but as well as Taylor’s performance, the crowds will also get to listen to Ed Sheeran, Ariana Grande and Hozier. VS, you’re spoiling us!