Taylor Swift' Blogs About 'Love Affair' With Fans, Selfies And Why Music Shouldn't Be Free 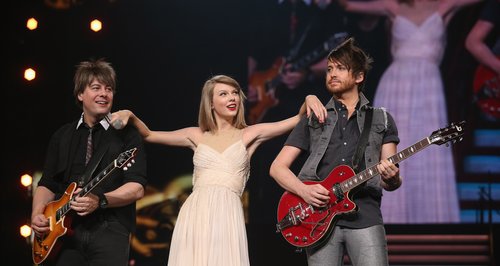 If you’re a #Swiftie you’re basically in a relationship with Taylor Swift. The singer opens up about the obsession with celebs private lives and her predictions for the future of the music industry.

Taylor Swift is no stranger to the ins and outs of the music industry – she’s been making music since 2006, dontcha know? – and has spoken out in a Wall Street Journal blog post about her predictions for the future of the industry.

Taylor is a firm believer that the album is not dying out as some predict, she said, “There are many (many) people who predict the downfall of music sales and the irrelevancy of the album as an economic entity. I am not one of them. In my opinion, the value of an album is, and will continue to be, based on the amount of heart and soul an artist has bled into a body of work. Piracy, file sharing and streaming have shrunk the numbers of paid album sales drastically, and every artist has handled this blow differently.”

And Taylor is definitely not a fan of artists just giving their music away for free, devaluing the industry as a whole. She said, “In recent years, you've probably read the articles about major recording artists who have decided to practically give their music away, for this promotion or that exclusive deal. My hope for the future, not just in the music industry, but in every young girl I meet…is that they all realize their worth and ask for it.”

“Music is art, and art is important and rare. Important, rare things are valuable. Valuable things should be paid for. It's my opinion that music should not be free, and my prediction is that individual artists and their labels will someday decide what an album's price point is. I hope they don't underestimate themselves or undervalue their art.”

While Taylor agrees that there will always be people out there who will buy albums, she believes that people will only buy those that really speak to them. Likening being a fan to being in a relationship, T-Swizzle said, “There are always going to be those artists who break through on an emotional level and end up in people's lives forever. The way I see it, fans view music the way they view their relationships. Some music is just for fun, a passing fling. Some songs and albums represent seasons of our lives, like relationships that we hold dear in our memories but had their time and place in the past.”

“However, some artists will be like finding ‘the one.’ We will cherish every album they put out until they retire and we will play their music for our children and grandchildren. As an artist, this is the dream bond we hope to establish with our fans. I believe couples can stay in love for decades if they just continue to surprise each other, so why can't this love affair exist between an artist and their fans?”

The way fans interact with their idols has also greatly changed in the past few decades, with Taylor saying that she doesn’t get autograph requests any more. “There are a few things I have witnessed becoming obsolete in the past few years, the first being autographs. I haven't been asked for an autograph since the invention of the iPhone with a front-facing camera. The only memento ‘kids these days’ want is a selfie.” Well, who wouldn’t want a Swifty Selfie?

And while people may not want her scribble on a piece of paper anymore, Taylor thinks people will always want a piece of her private life. She said, “I predict that some things will never change. There will always be an increasing fixation on the private lives of musicians, especially the younger ones. Artists who were at their commercial peak in the '70s, '80s and '90s tell me, "It was never this crazy for us back then!" And I suspect I'll be saying that same thing to younger artists someday (God help them).”