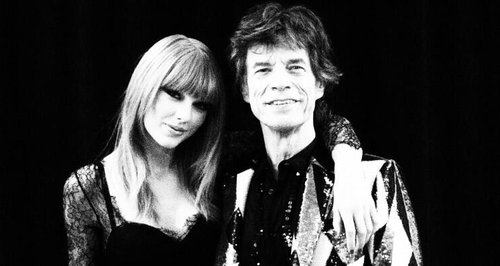 The '22' singer performed a cover of 'As Tears Go By' alongside the 'Satisfaction' rock band.

Taylor Swift joined the Rolling Stones on stage last night (3rd June) for a surprise duet performance on their '50 And Counting' tour.

The 'I Knew You Were Trouble' singer tweeted fans to say it had been a dream come true to join the rock band on stage in Chicago for a duet of their song 'As Tears Go By'.

Taylor and frontman Mick Jagger sung a stripped back version of the track, originally a hit for them back in 1964, for the band's concert at the United Center in Chicago.

"Looking forward to singing with @TaylorSwift13 tonight!" the Rolling Stones tweeted earlier in the night as a teaser. "Wonder which song we will do?"

"Filing this under 'never in my wildest dreams'," Taylor tweeted after the concert, alongside a picture of her with the legendary rock band. "Thank you @RollingStones for inviting m me to Chicago to sing with you.

"Filing this under 'friends forever'. @MickJagger," the '22' singer added.

Check out a picture of Taylor Swift and Mick Jagger performing together below (Credit: PA):

The 'Satisfaction' rock band have previously been joined by female stars including Cheryl Crow, Carrie Underwood and Katy Perry on their current tour across the world.

Taylor Swift is set to perform live at the Capital FM Summertime Ball 2013 this weekend on Sunday 9th June at Wembley Stadium.

Check out a video clip of Taylor Swift joining the Rolling Stones on stage at their concert below: