Taylor Swift Dancing: 24 GIFs That Prove She Can REALLY 'Shake It Off'! 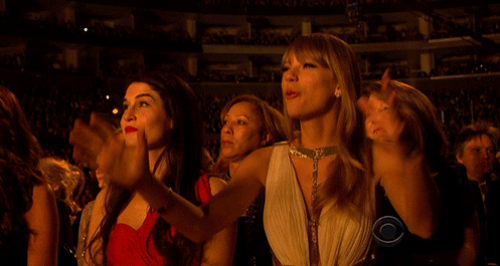 There's no crowd too cool, no event too posh. No matter who she's with or where she's at Taylor Swift KNOWS how to have a good time.

When Taylor Swift released her massive single 'Shake It Off', there were definitely a LOT of critics. "But Taylor CAN'T DANCE", they cried as she repeatedly sang about shaking and generally being lightning on her feet.

But then the music video came out and BAM, TayTay had the moves. So to celebrate, we put together the GIFs that prove Taylor's always been a secret dancing pro (yep, we're looking at you, awards ceremonies)...

Even though Tay admits that she isn't the world's greatest dancer, that never stops her from having THE best time at every event, like ever.

She just LOVES having a right old boogie - especially with the person who's actually performing! (Oh HEY Flo Rida).

This year's VMAs were no exception...

In fact, we wouldn't be surprised if Taylor had been working on her moves especially for that evening.

Sometimes, Tay's lucky enough to have other people joining in with her interpretive dance skills.

But she really isn't afraid to go it alone, either. She just loves dancing that much.

Check her out examining the non-moving crowd behind her. She feels so bad for them.

They just don't have the natural dance talent she has.

Look at that RHYTHM!

No wonder her new single's called 'Shake It Off'.

Surely her feet must hurt from dancing constantly?

Nope, she just powers on through.

Seriously, is she a professional dancer on the side or something?

Beyonce better watch out because she's got some competition...

Oh Taylor, always dancing even when she's sat down.

Here she is jamming along to One Direction. LOOK AT THOSE EMOTIONAL ARM GESTURES.

Who cares about messing up her perfect up-do? Dancing is WAY more important.

The petition for her to star in a new Step Up film starts now.

Please never stop dancing, Swifty. It fills our hearts with so much joy.