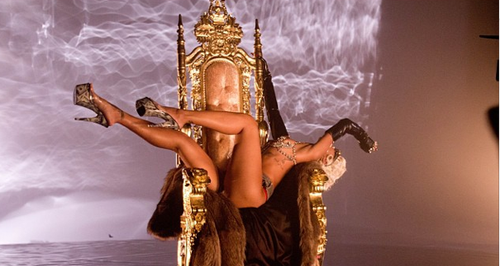 The 'You Da One' star gives fans a taste of what to expect in her latest promo.

Rihanna has released behind the scenes footage from the making of her new music video to 'Pour It Up'.

Check out the footage from the video below:

*Warning, this video contains strong language which may cause offence*

The 'We Found Love' singer gets behind the camera as she turns director watching some of the extras at work.

"It's going to be very very sexy in a way that I don't think has ever been done before," reveals her choreographer on set.

The track is taken from her latest studio album 'Unapologetic' and follows on from the likes of 'Stay' and 'Diamonds'.

Meanwhile, Lady Gaga recently ruled out speculation that her new album 'ARTPOP' contains a collaboration with the Bajan star.