Simon Cowell gives his music blessing as the former 1D star took to Twitter to reveal that he has signed a deal with RCA records. #realmusic

It's been brewing ever since his departure from One Direction back in March, but now fans can celebrate as Zayn Malik has finally confirmed his plans to go solo.

The former 1D star officially announced on his Twitter account that he has signed a deal with RCA Records - home to the likes of Chris Brown, Justin Timberlake and Alicia Keys.

I guess I never explained why I left , it was for this moment to be given the opportunity to show you who i really am! #realmusic #RCA !! 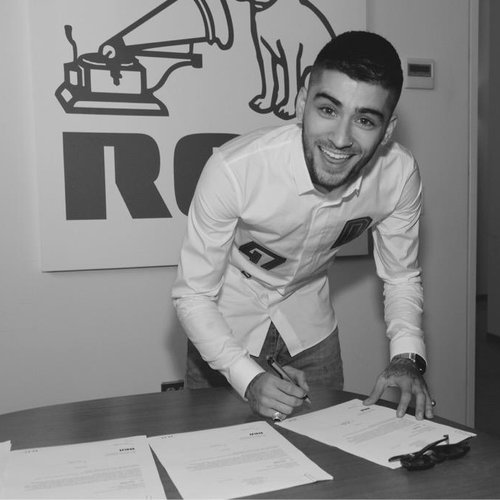 I believe they are the perfect label for @ZaynMalik’s solo career and I am sure whatever they release together will be special.

Earlier this week producer Malay – who has previously worked with the likes of Frank Ocean, Alicia Keys and John Legend – posted a photo of Zayn with his daughter on Instagram alongside the caption “Benefits of the job… my daughter gets to meet my co-workers, one who happens to be one of her favorites @niazkilam what an amazing soul #zaynmalik" hinting that the pair were working on the 22-year-old solo material.

“I Thought He’d Been Hacked”: Naughty Boy Responds To Zayn Malik Slamming Him On Twitter

Zayn had originally been working with Naughty Boy on some solo music but their relationship was marred by controversy from the outset, with Louis Tomlinson starting a war of words on Twitter and Zayn also attacking the producer in a tweet saying they were not friends.

With new label mates such as Chris Brown and Justin Timberlake you can be sure that Zayn's solo offering will be a sure fire hit when released.