One Direction's Harry Styles To Write Songs With Gary Barlow?

The 'Live While We're Young' singer reportedly hooked up with the Take That man to talk songwriting in New York recently.

One Direction could be set to head into the recording studio to write tracks with Gary Barlow after the pair met up in New York recently.

The 'What Makes You Beautiful' singer is said to have caught up with the Take That man to get some advice at Soho House in the Big Apple.

"Gary has been over in New York working on music for a Broadway musical version of Finding Neverland. He heard Harry was in town and arranged to meet up," a source told The Sun.

The publication also claims that Harry is keen to get advice wherever he can - especially from an experienced musician.

"They had a great afternoon talking about Gary's life in Take That as a young bloke and then more recently," the insider added. "Harry is an attentive guy and really listens. 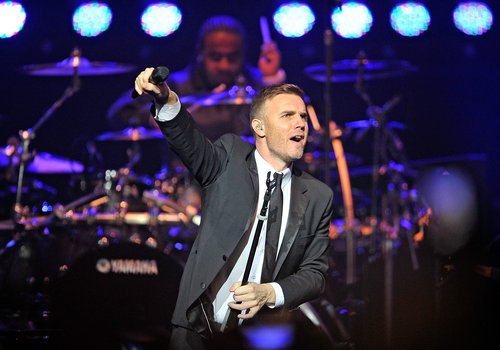 "He likes keeping older company and soaks up as much advice as he can get."

The source continued: "Gary talked him through his songwriting techniques and offered to write with him whenever they get the chance."

Gary is also currently heading around the UK on auditions for the new series of The X Factor and has teased a Take That return in 2014.

Harry and the rest of One Direction are still in the US as they perform on their 'Take Me Home' world tour.

They will also release new single 'Best Song Ever' at the end of the month.