The 'Heart Skips A Beat' singer says he will help the 'Candy' singer go on a romantic evening with his wife anytime.

Olly Murs has revealed that he has offered his babysitting services to Robbie Williams in order to let the singer go on a romantic evening out with his wife Ayda.

The artists are currently on the road together for the Take That man's 'Take The Crown' tour and the Essex star told the Daily Star he's happy to help out whenever he can.

"I've said I'll stay in and look after Teddy if Robbie wants a romantic night out with the missus," he confessed. "I think I could handle that once or twice."

Robbie became a father for the first time last year as he and Ayda welcomed daughter Theodora Rose – affectionately known as Teddy. 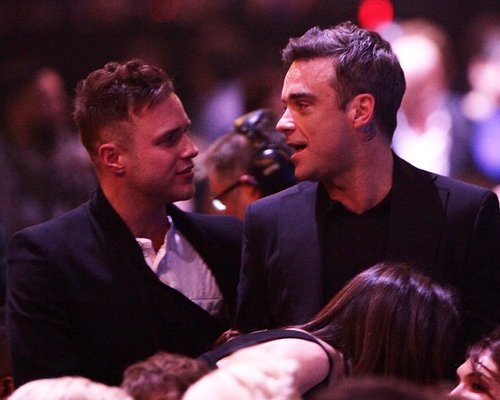 The tour recently finished a five-night residency at the Etihad Stadium in Manchester and will now head to Glasgow before returning to England at Wembley Stadium.

As well as supporting Robbie on tour, Olly has also been joining him on stage for a duet of 'Kids' during the shows.

The former X Factor star revealed how the collaboration came about during a behind the scenes video diary form the tour.