Little Mix Want To Work With Jason Derulo And Macklemore 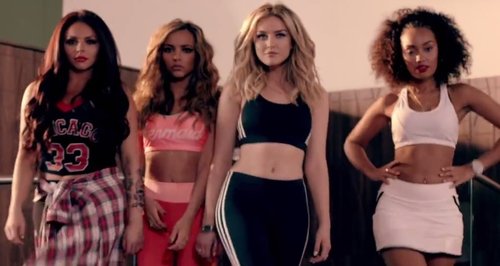 The 'Wings' stars talk about writing with American producers and their plans for new music.

Little Mix have revealed that they are wanting to work with Jason Derulo and Macklemore.

The 'Word Up' stars told the Daily Star that 'Talk Dirty' is one of their favourite tracks and a team-up with the US star would be great.

"We want to write with more American producers and are hoping to work with Jason Derulo's people," revealed Jade. "'Talk Dirty' is our favourite song so more stuff like that.

"And we would love to collaborate with Macklemore too."

Speaking about new music, she continued: "It's about making more hits, really. We start working on it as soon as we get back from America before our UK tour, so it will be a bit of a rush."

Meanwhile, the girls recently wrapped up their supporting slot on Demi Lovato's US tour.

Demi was seen pranking Little Mix during their final show dressed as a snowman.

> One Direction And Other Celebs Perform 'Talk Dirty' - WATCH