Little Mix Praise Each Other For Their Chart Success: "You Can't Forget That" 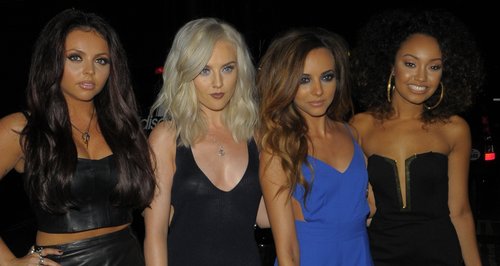 The 'DNA' stars say they "wouldn't want to be anywhere else" right now except with each other.

Little Mix have opened up about their meteoric rise to fame and say they will "never forget" that they have each other to thank for their success.

The 'Wings' four-piece also spoke about the difficulties of being separated from family and friends because of their work, as well as learning to ignore internet criticism over the year.s

"It's really hard, like all the early starts and loads of different things that come with that," Leigh-Anne Pinnock revealed to the Daily Mail this week. "But at the same time I'm having the most fun I've ever had in my life.

"I'm with my three best friends, like my three sisters," she explained. "I wouldn't want to be anywhere else."

"That's the hardest thing to be honest, not seeing friends and family," Jade Thirlwall agreed. "Its so, so hard, it's hard ring away but then, at the same time, without you lot I don't know what I'd do.

"If we didn't have each other, none of this would have happened," Leigh-Anne added. "So you can't ever really forget that."

The 'DNA' four-piece also opened up about how much they have grown up since winning The X Factor UK in 2011, and say they are much thicker-skinned about criticism now.

"We were only young girls when we first started [and] at that age, if you see one bad comment on Facebook it gets to you," Jade explained. "Then you go into this world and it's magnified by a million.

"You just learn to ignore the bad things really," Perrie Edwards added. "They're doing it to make themselves feel better."