Justin Bieber And Selena Gomez Go On A Cinema Date – Are They Back Together At Last? 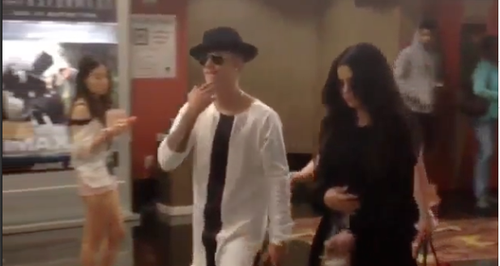 Justin and Selena have been caught on video leaving a cinema together after a romantic meal – is Jelena finally back on?

Justin Bieber and Selena Gomez have been on and off (and suspected to be on) more times than we have had hot dinners – no, really. We even created this handy relationship timeline to help you keep up – but the couple looked very close indeed last weekend.

Justin and Selena were filmed by a fan leaving a cinema in Los Angeles, with Selena putting a protective arm on Justin’s back as they walked out with their minders.

The pair also posed for a selfie with ‘Stalker Sarah’ – an American teen who became internet-famous for her ability to find literally any celeb and make them take a selfie with her.

Justin and Selena first started dating back in 2010, when they were both fresh-faced pop pups – and Justin still had his floppy hairdo but the couple haven’t been officially together since 2012.

The pair were also spotted on Wednesday at a bible study class together – romantic- where a source said they looked ‘smitten’ together. The source said, “They were very lovey dovey and cute. They came and left together with a few friends. They sat next to each other and listened to the sermon and were smitten with each other."

All this comes just a week after they were spotted partying together at Alfredo Flores’ birthday party – if they ARE just friends, they certainly have been spending a lot of time together lately!