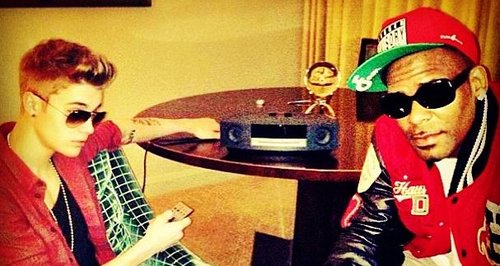 The 'Boyfriend' star follows in the footsteps of Lady Gaga by teaming up with the R&B star.

Justin Bieber has confirmed details of a collaboration with R. Kelly.

The teen titan posted a link to an interview with Kelly in which he spoke about teaming up with Justin.

"I just did a song [with him]," R. Kelly told Vibe magazine during a private listening for his upcoming album, 'Black Panties'. "[Justin] just called me to do a song, and it's hot. He wanted to go and do some R&B stuff, so we got together and did that."

The pair first hinted at working together back in January when the R&B star posted a picture of them hanging out in a hotel room.

R. Kelly most recently joined forces alongside Lady Gaga for her 'ARTPOP' new single 'Do What U Want'.

Meanwhile, Justin has been taking to Twitter last night to apologize to fans in Argentina following a flag incident on stage.