“He’s My Big Brother!” Post Malone Talks About That Pic Of Him Strangling Justin Bieber

Y’all can chill, there’s no real beef between these two after that cigarette incident.

We have to admit, there was a moment there when we were getting a little concerned about WTF was going on between Justin Bieber and Post Malone, bue we can all breathe a sigh of relief.

Over the weekend, a photo surfaced of Justin stubbing out a cigarette on Post Malone’s arm while he performed at one of Justin’s ‘Purpose’ tour after parties, which was followed by a snap of Post with his hand round Justin’s neck.

The fans started to worry as JB looked pretty petrified to be in Post’s clutches, and speculation started that the pair had fallen out after the cigarette incident.

Photos of Post Malone and Justin Bieber at a Houston nightclub the other day. (April 10) pic.twitter.com/nyUJUAtiJ9

Thankfully, both Post and Justin have laughed off rumours of any beef between them, with Justin posting a picture of HIM choking Post and Mr Malone explained all on Twitter, referring to the Biebs as his “big brother”. 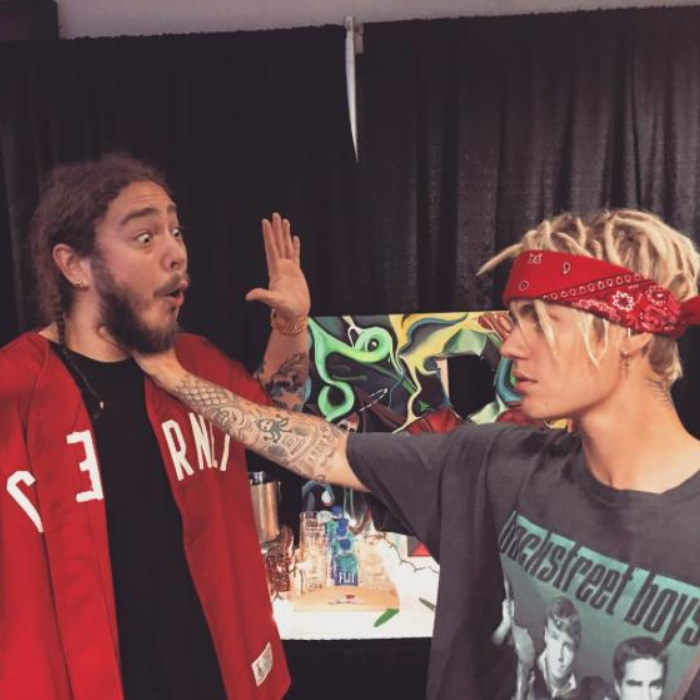 Post took to Twitter to say, “I love Justin y'all tripping lol. He's my big brother and we like to rough house. If we was fighting someone would have done something instead of just sit around while the beibs gets chokeslammed.” [sic]

i love Justin y'all tripping lol

he's my big brother and we like to rough house

end of story i love jus more than life and THE MIXTAPE IS ON THE PRECIPICE OF RELEASE. God bless my fans

Phew. Justin may be his ‘big brother’ but we wouldn’t fancy getting into a fight with Post Malone! Plus, they’re on tour together for the next few months so a feud would have been HELLA awkward.