The 'Believe' star adds further inkings to his collection after debuting Koi cap tattoo earlier in the week.

Justin Bieber has once again added to his ever-growing tattoo collection with a pair of new inkings.

His latest body art includes a tiger head on the top of his right arm with an angel towards his wrist.

The new inkings were seen at a fan meet and greet backstage on his current 'Believe' world tour in Stockholm.

Earlier this week, the teen was also spotted with a new tattoo of a Koi carp on the same arm.

The new designs bring the Canadian's total tattoos up to 14 with a crown on his chest, Jesus on his leg and the word "Believe" all etched onto his skin.

Check out Justin Bieber's new tattoos from his meet and greet with fans in Sweden below: (Picture: BieberFever.com) 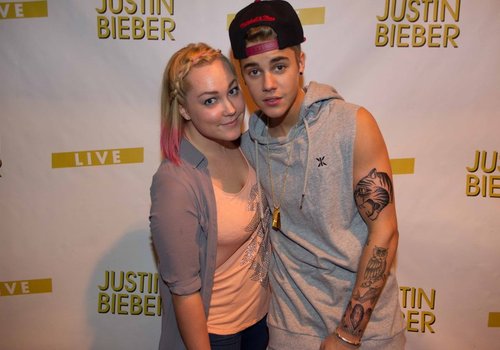 Meanwhile, the Canadian star was joined by his former girlfriend Selena Gomez on one of his European tour dates recently.

Justin even shared an intimate Twitter snap of the pair getting close before quickly deleting it from his social networking account.