The 'Baby' singer was seen among his entourage with the unknown female as he prepared to head back on the road.

Justin Bieber was seen getting close to a mystery female out in Florida recently as he prepared to head back on tour.

The teen star had over a month off in-between dates on his outing before resuming the jaunt back in San Diego this weekend.

The 'As Long As You Love Me' singer was pictured at the tony Bal Harbour Shops outdoor mall in Miami Beach with the woman – who was sporting a revealing red dress.

Taking to Twitter, the Canadian star revealed his excitement to be back.

"SAN DIEGO IM IN THE BUILDING AND THE #BELIEVETOUR IS BACKKKKK!!!!!!" he wrote.

Check out a picture of Justin with the mystery female below: (Picture: Splash) 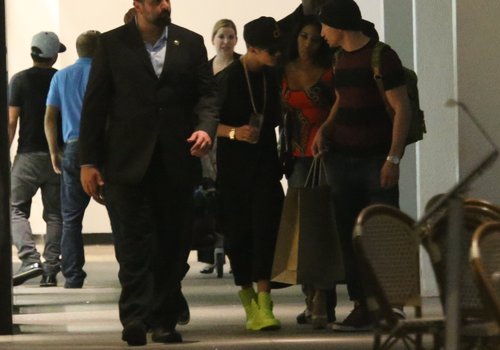 Meanwhile, Justin has been busy teasing his new music plans as well as the release of a new movie this year.

He's already unveiled the single artwork for new track 'Heartbreaker' and promised fans will hear new songs before the end of 2013.