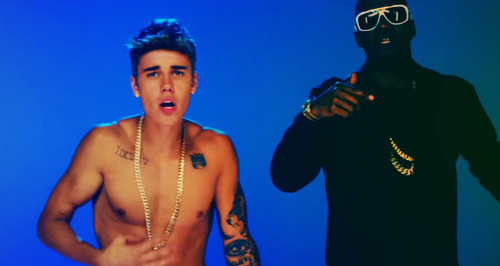 The 'Boyfriend' star features alongside Juicy J on the new single from the R&B singer.

Justin Bieber can be seen going topless and showing off his rap skills in the music video for Maejor Ali's new single 'Lolly'.

The promo also features fellow collaborator Juicy J as the stars dance and bounce around on set.

The track is taken from the R&B star's upcoming next album and sent Twitter into overload when it was posted online.

Fans had been anticipating the promo for some time, with Justin teasing the project.

Watch the video for 'Lolly' below:

The teen also sent Twitter crazy recently by posting a shot of himself with a script from the new Batman vs Superman movie teasing his involvement.

He has also this week scooped nominations for the MTV Europe Music Awards 2013.