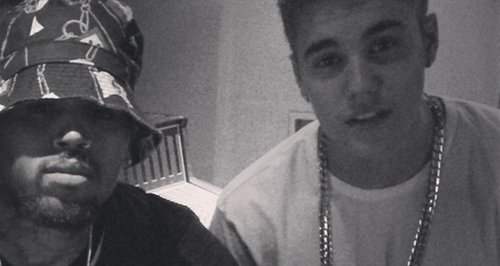 Justin says this one is "for the fans", as he lays down a brand new duet with one of his fellow pop stars.

Are you sitting down Beliebers? If not, make sure you are before you read ANY further!

Justin tweeted fans this week with some very exciting new team-up news, as he's been hitting the recording studio to lay down some brand new music with none other than Chris Brown.

The 'Boyfriend' star has been very generous with fans in recent months, dropping new songs all over the shop to keep the Beliebers happy, and now he's back in the studio again and this time with Mr. C. Breezy.

Thank you #beliebers. I love you

"Studio, me and CD did 1 for the fans," Justin posted, immediately causing Twitter to go into meltdown as fans realised two of their idols are working on a duet.

Been hearing a lot about @justinbieber's music collaborations! So excited to hear it all especially the ones w/ @ArianaGrande & @chrisbrown!

The pair have yet to confirm any more details about the team-up track, or when fans might get their first chance to hear it, but stay tuned to Capitalfm.com for more news as soon as it drops.

One thing's for sure… 2014 is going to be a VERY exciting year if you're one of Justin's Beliebers.