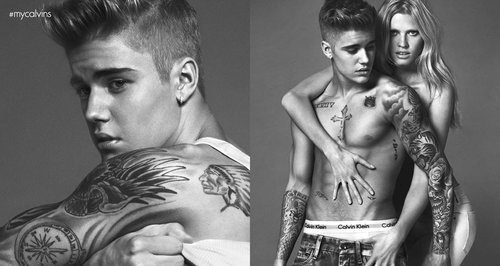 Justin Bieber’s new Calvin Klein campaign was only unveiled last night but the GIFs are already coming in thick and fast… #FIT.

It was the moment that a million #Beliebers have waited their whole lives for … Justin Bieber’s new ad campaign for Calvin Klein dropped last night and the internet went into meltdown!

Justin’s new shots see him wearing little more than his Calvin Klein underwear with model Lara Stone – who also happens to be David Walliams’ wife - wrapped around him.

Justin tweeted the images, and got the news trending worldwide – the Beliebers are not a force to be messed with! The Calvin Klein twitter account also posted the video advert showcasing Justin’s insane drumming skills.

Of course, once you guys had got over the initial shock and awe of just how SMOKING hot JB looks in the new shots, the GIFs and memes came flooding in – any excuse to look at those photos is fine by us.

Here are some of our favourite fan GIFs and reactions: You guys could. NOT. Cope.

Hands up who wishes they were Lara Stone right now?

Yep. We were NOT ready.

Move over Ashton Irwin, we have a new drummer obsession

NOTHING is going to stop true Beliebers getting to those photos…

When you are dead but justin did a calvin klein photoshoot pic.twitter.com/PdZZZUXI8x

UGH. Those abs are making us feel some kind of way…

Best Calvin Klein campaign ever? We like to think so.