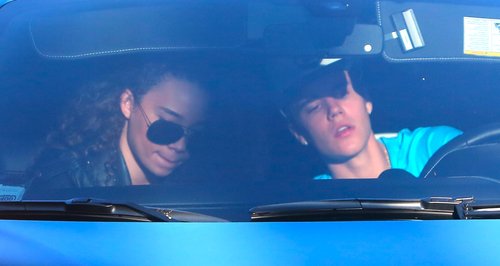 The 'As Long As You Love Me' singer is facing new rumours about his love life this week.

Justin Bieber has been linked to a new romance after being spotted out on an alleged date with a young model.

The 'Boyfriend' star was spotted eating out with model Ashley Moore on Tuesday (13th August) at the Bouchon Bistro in Los Angeles this week.

Justin was pictured driving Ashley in a convertible silver Ferrari before joining her for a sit down meal in the day.

The 'Beauty And A Beat' singer opted to go casual for the pair's meet-up in a simple combination of t-shirt, jeans, white sneakers and a baseball cap.

Ashley dressed up a bit more in leather jacket an trousers as well as a pair of aviator shades to cover-up her eyes.

The pair have previously been romantically linked, after allegedly being introduced by mutual friend Lil Twist.

Justin Bieber is believed to be currently single after his split from long-term girlfriend Selena Gomez at the end of 2012.

Justin Bieber is now preparing to unveil his new song 'Heartbreaker', and resumes his 'Believe' tour with a show in Marina Bay, Singapore on 23rd September.