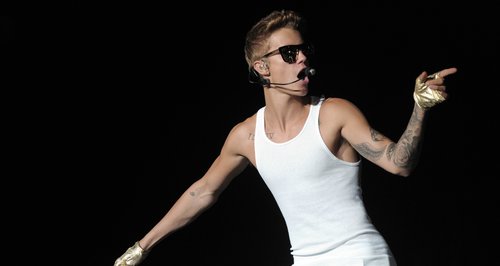 The 'Boyfriend' singer reportedly upset fans but reassures them he was unaware a flag was thrown at him.

Justin Bieber has taken to Twitter to apologise to anyone who thought he had swept an Argentina flag off stage recently.

The 'Beauty And A Beat' star was performing at the Monumental de Nuñez this weekend when he was fimed sweeping a load of items off stage with his microphone.

The teen titan assured fans on his social networking account last night that he was unaware a flag had been thrown at him and thought it was simply a t-shirt.

heard about what is going on with me down in Argentina and im shocked. I love Argentina and have had some of the best shows of my tour there

people throw stuff on my stage all show and i get it to the stage hands to get off so no one got hurt. that video i saw a bra and thought...

...it was a shirt. Im being told by my team it was a shirt but even if it was a flag I would never do anything to disrespect Argentina...

...or the people of Argentina or the fans. Im so sorry for anyone who took my actions the wrong way and I hope you can forgive this mistake

so once again to the people of Argentina. Im sorry if that was taken the wrong way and im sorry for my mistake. I hope u can accept this..

Justin said he would never do anything to "disrespect" his fans and praised the support he'd had during his time in South America.